WHY WE STAY TOO LONG! 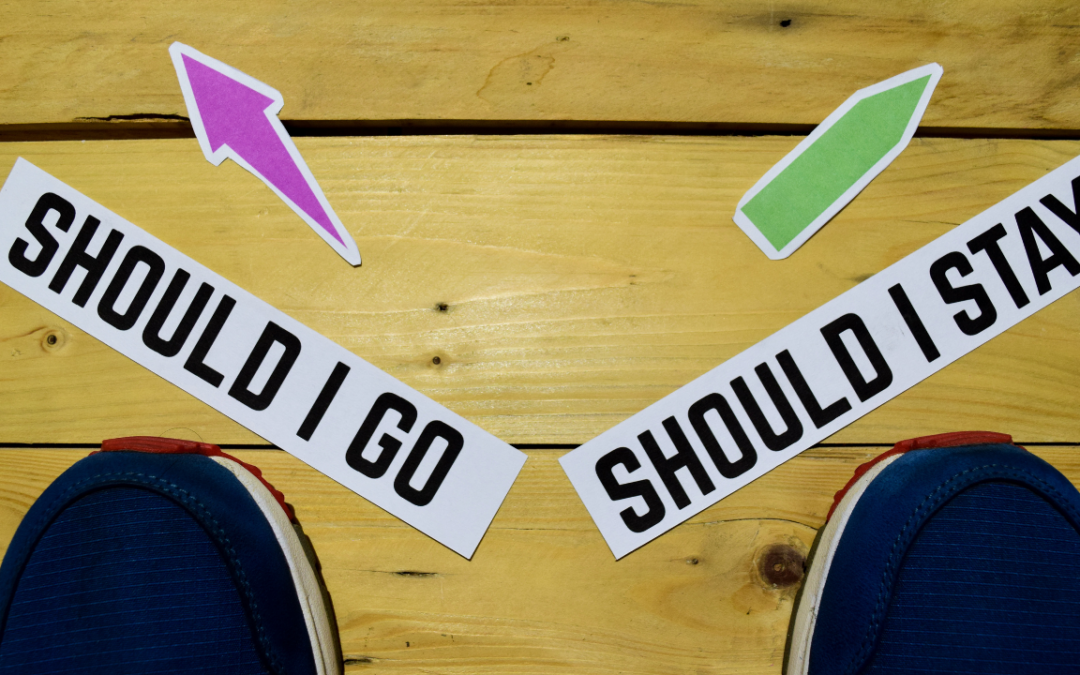 Have you ever stayed too long in a job, relationship or other situation that you’ve outgrown or has become toxic?

Or do you have a friend or family member who continually complains about their current circumstances but fails to do anything about it?

In my experience, there are two stand-out reasons why this happens:

Status quo bias is the tendency to want to stick to a path that you’re on. As I’ve explained in previous posts, our autonomic nervous system views any deviation from the ‘norm’ as a loss, frightening or even overwhelming – triggering the flight, fight, freeze response – often looking like imposter syndrome or self-sabotage.

As a result, you almost become paralysed, repeating the same thoughts, emotions, and behaviours (actions) that aren’t productive, keeping you unhappy, unfulfilled, and in a rut.

We are so used to hearing terms like ‘better the devil you know’ or ‘the grass isn’t always greener’ that we can remain ‘stuck’ where we are for years; this is a form of FREEZING.

Our brains are hard-wired for certainty.  Even if that certainty is painful. From your nervous system’s perspective, the known pain is better than the unknown potential pleasure.

Escalation of commitment is a term used to describe ‘sunk costs’, i.e. time, money or other resources that you can’t recover. For example:

If you identify with staying somewhere too long because of sunk costs, it can be helpful to consider that those things are in the past – you’ll never get that time, money, energy, commitment, etc., back.  Therefore, it’s far better to focus on the future and ‘cut your losses’ now rather than waste further valuable resources

Of course, whether the decision to stay is because of Status Quo Bias or Escalation of Commitment, fear is usually the underlying emotion driving it:

In my experience of working with thousands of people during my career, if you know you need to change your situation but haven’t yet taken action, at some point, you’ll get an enormous ‘Cosmic Kick’ forcing you to take action.

You may call that new-age ‘woo-woo’ nonsense, but I see examples far too often for it to be a coincidence. For example:

All extremely common examples of people waiting so long, knowing that they really need to change, that something outside their control forces them into action.

Have you stayed where you are too long?

Maybe this is the sign that you need to do something different. Yes, it can be scary, but sometimes, you just have to:

Feel the fear and do it anyway!

If you’d like support taking the next steps in changing something big or small in your life, contact me at jo@jobanks.net.